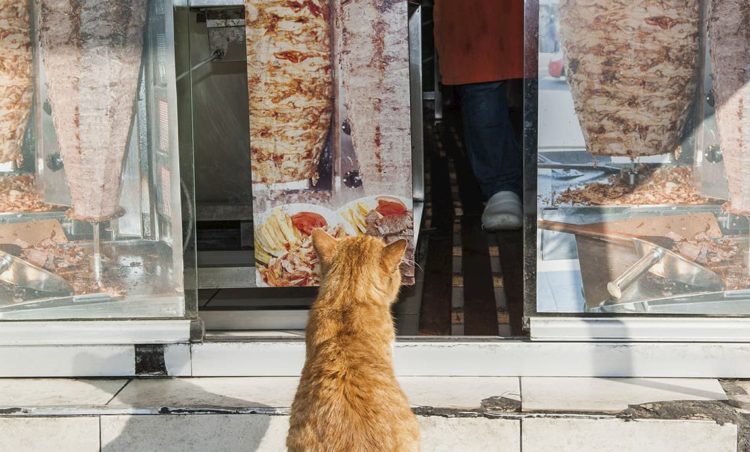 Kebab meat is far too dangerous for a cat to eat. It’s way too greasy and way too spicy to be considered anything but harmful for a cat’s digestive system. Keep in mind kebab is often served with bread – and bread isn’t good for cats either.

We all know how much cats love meat – especially if it’s properly cooked. And, truth be told, kebab meat stays above the fire for a long time. Unfortunately, you have to do more than cooking your meat the right way if you want your cat to safely eat it. How you season it is very important too!

If you want to cook kebab meat, you have to use onions, garlic, peppers, and a lot of spices during prep time. That will leave you with a heavy-seasoned piece of meat, one that doesn’t have a single ingredient that won’t hurt your cat’s stomach.

Eating kebab can cause a cat to have serious digestive issues, like diarrhea, vomiting, stomach pain, and a few other ailments. A little nimble won’t cause much trouble other than an upset stomach, but a handful can land your cat in a pretty bad spot.

In a nutshell, no kebab for your cat!

Cats aren’t that big on kebab meat because of everything it has. Onions, garlic, and spices are more than enough to drive a cat away from a piece of meat – and kebab meat has plenty of that!

Does this mean your cat will hate kebab meat? Well, it’s not like that!

Every cat has a personality of its own. And even though nine cats out of ten will want nothing to do with a piece of kebab meat, there’s always that one cat that is ready to eat anything. Because of that, you should always play it safe and keep your kebab off-limits.

It’s a given that you shouldn’t feed kebab meat to your cats, no matter how tiny the portion it is. You should always try to keep it away from your cat’s reach too – and remember, cats are extremely smart, especially when it comes to finding food that they want to eat. Be careful when you hide something.

What should I do if my cat eats kebab meat?

If you suspect your cat ate kebab meat, you need to try to figure out how much it had. A little piece is no cause for emergency. On the other hand, if your cat ate more than a handful of kebab meat, call the vet and explain what happened.

After your cat ate kebab meat, you will have to pay attention to it and see what happens.

Your cat will probably suffer through a little bit of an upset stomach. If no other symptoms arise, your cat’s problems will stop in a couple of days.

Remember to clean the litter box frequently (more than usual) and change your cat’s water every time you can. If symptoms get worse, take your cat to the vet and see what kind of medication will help.