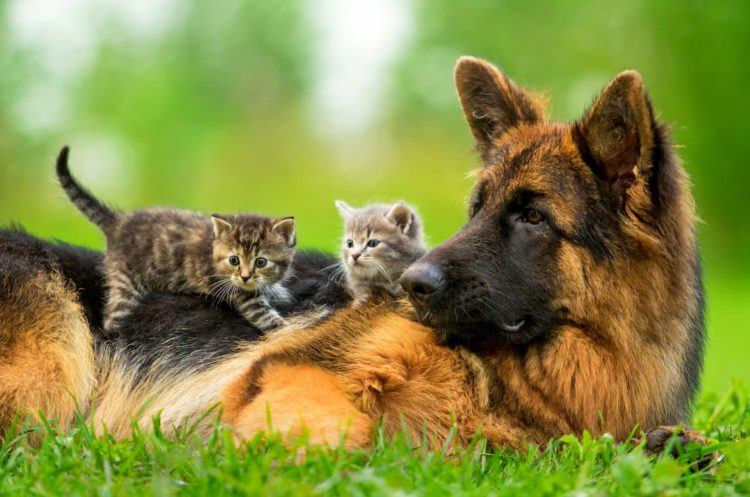 Whether your German Shepherd can get along with cats successfully or not depends on its personality, previous interactions with other pets, and how well trained it is. Most German Shepherds have no problem with cats.

The key lies in doing things the right way before your GSD meets with cats. There’s a brief preparation process that can increase the chances of a successful introduction. Because of that, you should be patient when it comes to introducing German Shepherds and cats.

If you teach it right, your GSD will know how to behave around cats – and it could be the big best friend of your small kitten!

What makes it hard for a German Shepherd to get along with cats?

German Shepherds are big, controlling dogs that love to herd smaller animals. Cats, on the other hand, are small creatures that love to roam around free. Their personalities may clash – unless your GSD is properly trained. Fortunately, GSD and cats can get along despite these issues.

A GSD is three or four times the size of an average cat. Imagine how scared a cat would feel when this huge animal gets close to it – or even worse, tries to bite it!

German Shepherds mean no harm when they use their mouths to grab other animals, but they can’t help it either. It’s in their nature to try to herd small animals. Cats may take it the wrong way, though.

This dog breed also loves to play – and, sometimes, cats don’t feel like playing. And that could be a problem too! It’s nothing that cannot be solved, though.

What qualities help German Shepherds to get along with cats?

Many qualities make a German Shepherd perfect for cats. They are protective of small animals, they are smart enough to be easily trained, and they are gentle when they deal with others.

Even though cats won’t understand how easy-going a GSD is, they will slowly get around the fact that a German shepherd won’t hurt them but try to protect them instead. This is great for the introduction phase, which is supposed to be slow and calculated.

Believe it or not, the German Shepherd is the perfect dog to adopt if you have cats in the house. They are not aggressive at all and know how to handle small creatures with care (including babies!)

What are some tips to help my German Shepherd get along with cats?

There are a couple of things you need to keep in mind when you’re introducing a German Shepherd to a cat: never force the interaction, never punish bad behavior, always encourage good behavior, be more than patient, and stay positive.

Can you train a German Shepherd to get along with cats?

Of course you can train a German Shepherd to get along with cats! That’s what you’re supposed to do. A GSD will intuitively know how to behave around other animals, but you should train it to reinforce good behavior.

Before you introduce your GSD to your cats, make sure it knows certain commands by heart. The three basic ones are a must: “Stop”, “Sit,” and “Drop it”. These three commands will help you keep your German shepherd under control when it first meet your cats.

How can I train my German Shepherd to get along with cats?

Introducing your German sShepherd to your cats is a 5-stage process that can take some time. You’ll start by scent swapping, then they’ll see each other through the glass, they’ll meet through a barrier after that, once that’s done with they’ll meet while restrained, and, finally, they’ll meet with no restraints.

Leave each cloth with the other animal. Don’t try to force anything, just watch their reaction. With any luck, they’ll be curious about it and won’t react negatively.

Every day or so, try to give your pets 5 to 10 minutes’ worth of face time. Make sure they are separated through a glass door or something similar. That way, they’ll get to know each other slowly and safely.

After a few days, do the same – but this time, separate the animals with a barrier, like a pet gate. That way, they’ll get to know each other better, learn their scent, and slowly develop a friendship.

Once again, after a couple of days have passed, let them meet each other with no barriers. Put a leash on your German shepherd just in case it gets overly affectionate. Let them smell each other, play if they want to, and more. Repeat for a few days more.

If everything goes well, it’s time to let your dog and cats be together with no restrictions. Make sure everyone is comfortable. Pay extra attention to your cats as they are more subtle with their feelings. With any luck, they’ll all be best friends already!

How can I tell if my German Shepherd does not get along with cats?

Growling, biting, and other shows of aggression are clear signs that your German shepherd does not get along with your cats. This type of behavior can change through time – but make sure you stop the introduction when something like this happens.

Even though GSDs are lovable, gentle, and good-hearted dogs, sometimes there’s a little bit of resistance when it comes to meeting other pets. Don’t worry! This is normal. You need to be patient and try again later.

What to do if my German Shepherd does not get along with cats?

You shouldn’t lose hope if your German Shepherd doesn’t behave the first time around it’s around your cats. Sometimes, introductions take a long time (weeks or months, even). Being patient is key. There are exceptional situations when GSD and cats don’t get along – but that’s far from common.

Unless either animal is harmed (e.g. your dog acting aggressively towards your cat or vice-versa), you can try different alternatives to overcome this problem.

For example, if your GSD has too much energy for your cat to deal with, you can add extra walks to tire it out. If the problem is food-related, you’ll have to feed your pets in different rooms.

Unfortunately, when it comes to violent aggression from one animal to another, there’s not much you can do. If either one is too aggressive, you’ll need to figure out which animal needs a new home. That way, you’ll keep animals from getting hurt.

You can (and should) talk to an animal behaviorist and a vet before you decide to relocate one of your pets, though. It’s the last shot that it’s worth taking.

Will my German shepherd kill my cat?

It’s close to impossible for a German Shepherd to try to kill a cat. GSDs love to play, and sometimes they play rough – but there’s no way it will try to harm a cat! Most German shepherds will protect your cat, not the other way around.

If you socialize your GSD the right way and introduce it to your cats like you’re supposed to, there’s little to no chance for a German shepherd to hurt cats. They might be big animals – but they are full of love!

Why is my German shepherd obsessed with my cats?

Your German Shepherd isn’t obsessed with your cat – it simply loves to play too much! GSDs are active dogs that love to chase around small animals, and your cat happens to be there. Bear in mind German Shepherds show affection this way, by being overly affectionate!

German Shepherds are guardian dogs – and they are good at what they do! Not only your GSD will love to play with your cats, but it will also make sure nobody tries to hurt them.

That’s what GSDs were bred to do, so that’s what they do. It may seem like too much for the untrained eye, but for German Shepherds, it’s business as usual.