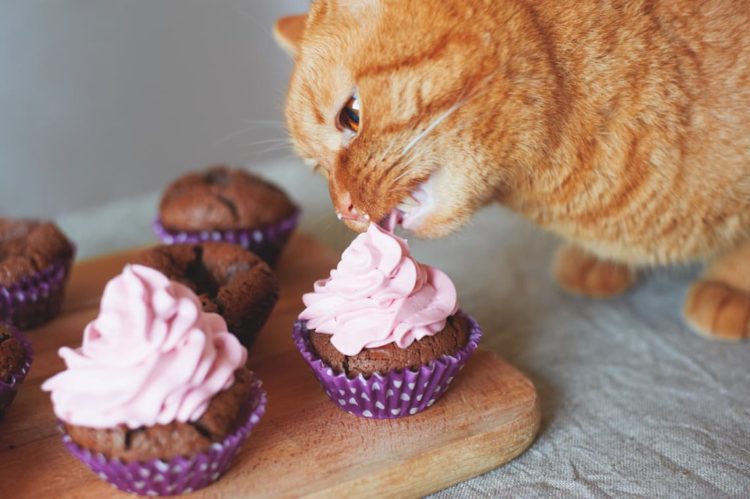 First things first, your cat should never eat frosting. It’d be like giving your cat nothing but sugar and milk. In a worst-case scenario, the frosting could have chocolate in it too – and that is not good for cats neither.

It goes without saying that most frosting is on top of a cake. Cats shouldn’t have cake either! So, whether cats found frosting alone or all over a piece of cake, it doesn’t matter, they should not eat it! Frosting can bring a lot of trouble for your cat.

Is frosting dangerous for cats?

Frosting is definitely dangerous for your cat. It has all the wrong ingredients: milk, sugar, butter, and other bad stuff. Even though frosting isn’t going to kill your cat, it’s dangerous enough to make it feel sick for a long time.

A cat eating frosting is bad for two reasons. Number one, its ingredients. You already know how bad frosting ingredients are for your cat. Then, there’s a second reason: even if frosting was okay for cats to eat, it’d be no good for them either.

Frosting is nothing but empty calories – and, what’s worse, it’s a lot of empty calories per serving size. A spoonful is more than enough to make a cat feel full for a long time. And if a cat feels full, it won’t get its nutrients from cat food.

At the end of the day, frosting is nothing but bad news for your cat!

What happens if a cat eats frosting?

More likely than not, your cat will feel sick after eating frosting. Symptoms like vomiting, diarrhea, and lethargy are common in cats after eating such a thing. A couple of licks won’t hurt your cat, but a big bite of it is enough to cause some trouble.

After eating a handful of frosting, your cat will feel the same way as you would when you binge eat candy or other sugary foods. The cat will feel sick and a feeling of a more-than-full stomach.

With enough time, the cat will probably purge a big part of the frosting. Or, perhaps, will go about its day like nothing happened! Nine times out of ten, you’ll have to clean the floor, though.

What should I do if my cat eats frosting?

The first thing you should do is call the vet. Tell him what happened and how much frosting your cat had. After that, explain how your cat is doing. If your cat ate a lot of frosting, you’ll probably have to go to the vet.

Keep in mind your cat licking a little bit of frosting is no cause for emergency. On the other hand, if you found out your cat had 10 minutes alone with a cake, it probably ate more than enough to make it feel sick. That’s when a trip to the vet may be necessary!