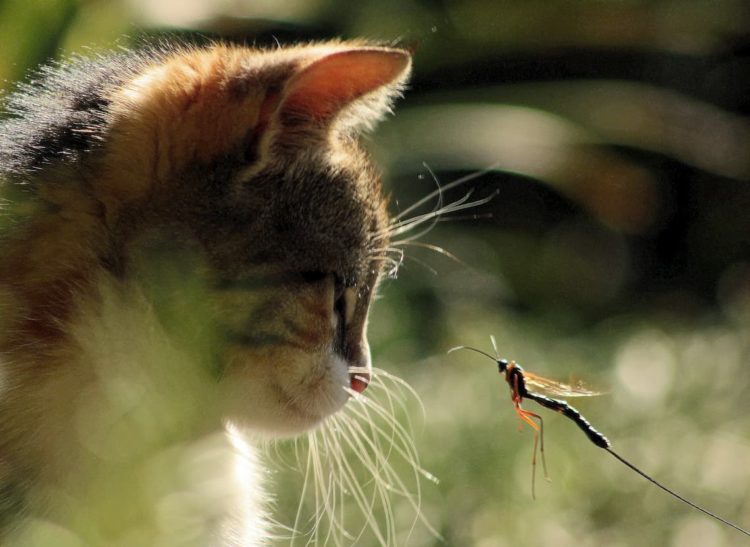 There’s no problem with your cat eating a dragonfly. You shouldn’t go out of your way to feed your cat dragonflies, though – but if your cat was out on a hunt and caught one, there’s no issue with it eating its prey.

Cats are known for going out hunting and coming back with a present for their owners. Sometimes, a cat will throw a dragonfly at your feet to show its love. Other times, the cat will eat the dragonfly long before coming back home. There’s nothing wrong with either scenario – and you shouldn’t worry about it either way!

Why do cats chase dragonflies?

Cats will chase almost anything – and they do so because they are hunters at heart! Most felines are hunters and scavengers. Domestic cats have that in their genes. When they see something prey-like such as a dragonfly, they can’t help but to go back on the hunt.

If you own a cat, you probably have seen it chasing something at least once. That’s how they have fun. It’s no different when they chase dragonflies, they simply love to do it. Similar to other predators, cats love the thrill of the hunt.

At the end of the day, chasing around dragonflies is a great exercise for cats, so there’s no need to worry about it!

Are dragonflies poisonous to cats?

Dragonflies aren’t poisonous at all. Your cat will not feel anything at all after eating a dragonfly, other than a little tickle in its throat. Cats are not at risk when they eat a dragonfly, not for poison, getting stung, or anything for that matter.

Your cat could have some trouble because of how big dragonflies are. Other than that, there are no issues your cat could face – nothing close to poison!

Similar bugs, like cicadas, aren’t dangerous either. Most bugs aren’t poisonous, so you shouldn’t worry unless your cat is dealing with a spider, a scorpion, or something similar.

If you do have things like scorpions roaming around outdoors, it’d be better if your cat stayed inside. Even though cats will fight against most bugs and insects, it’s not worth the trouble.

Will my cat get sick from eating dragonflies?

Your cat won’t get sick if it eats a dragonfly or two. Worst-case scenario, your cat will get a little something stuck in its throat that will either go out after a coughing fit or end up being swallowed. Either way, no problem there!

If your cat appears to be sick after eating a dragonfly, it may be tired instead of feeling unwell. Your cat probably had to chase the dragonfly around for a long time – and tired itself out in the process.

After eating the dragonfly, your cat will need a moment or two to catch its breath. And maybe a nap too! If your cat starts to cough after eating a dragonfly (and sometimes even vomit the dragonfly back out), that doesn’t mean the bug was toxic but that your cat’s throat couldn’t handle the bug.