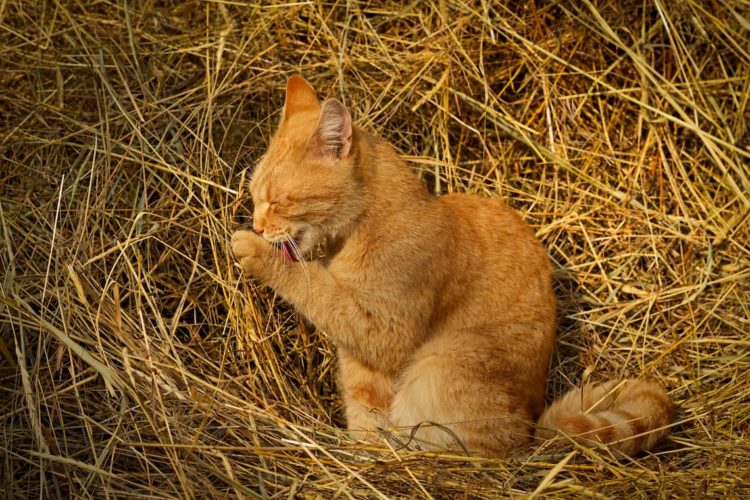 Your cat eating hay isn’t the best that can happen but it’s not the worst either. You can let cats eat a little hay as long as there are no problems after. Cats will often feel sick after eating hay – it’d be better if you can avoid that from happening.

Hay isn’t poisonous, toxic, or anything similar for cats. It also has no nutritional benefits for cats either. Diet-wise, it’s neutral. Unfortunately, it can upset your cat’s stomach. If that happens, it’s better to stop your cat from eating hay.

Keep in mind cats will continue to eat hay even after feeling sick, no matter how many times it happens. You’ll have to take action to make it stop!

Nobody knows for sure why cats like hay. Similar to cats eating grass, trying to figure out why that happens is something that could confuse anyone. It may be because of the taste or texture. Perhaps it’s because hay is so different from meat. Nobody knows!

If you know cats, you know they are bound to surprise you one way or the other. Cats eating hay is one of those surprising moments! We are yet to find out why that happens.

Is hay dangerous for cats?

For cats, hay isn’t dangerous but problematic. It has no nutritional value, so a cat full of hay is a cat lacking nutrients. More often than not, hay can make a cat vomit – but even if that happens, your cat won’t stop eating hay. It’s no good!

Hay isn’t dangerous in the sense that it will not kill cats. Your cat can spend all its life eating hay every once in a while and nothing bad will happen on a long-term basis. Unfortunately, on a short-term basis, hay will upset your cat’s stomach. That doesn’t make hay dangerous, though!

Some cats are lucky enough not to be troubled by eating hay. As long as your cat doesn’t vomit or has trouble pooping (either going too much or too little to the litter box) after eating hay, there’s nothing to worry about there.

How can I make my cat stop eating hay?

There are two ways to stop your cat from eating hay: the first one is rather simple, make sure hay is always off-limits for cats; the second one isn’t that much more complicated, you have to buy cat grass (cat-friendly grass sold in stores) and replace hay with it.

Eating hay isn’t that bad for a cat, but it can bring nasty consequences you’ll get tired of rather quickly. The best you can do is keeping hay completely off-limits. If your cat still tries to eat hay after that, buy cat grass, something similar to hay but less problematic.

Other than that, there’s not much you can do. You can keep whatever hay you have close to you – and every time your cat goes for a bite, you can stop your cat from doing it. Buying cat grass will probably fix the issue, though!