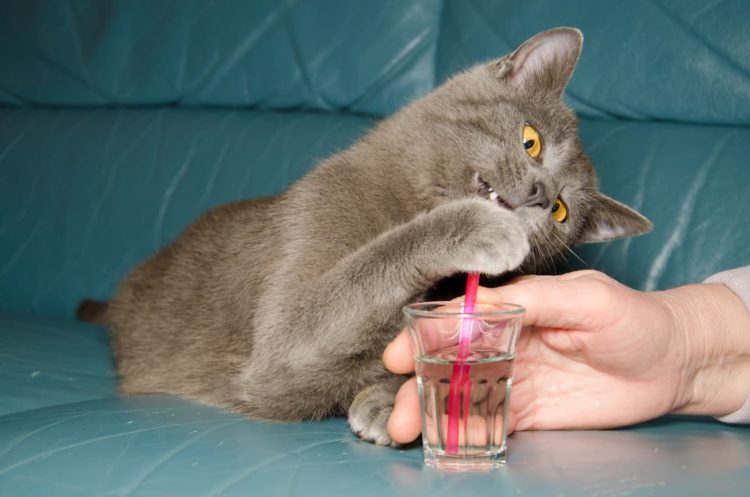 Most cats won’t know how to drink from a straw – and the ones that do know how to do it, shouldn’t be allowed to do so. Straws are rather dangerous for cats, especially when they’re left unattended. If your cat accidentally swallows a straw, that could mean trouble!

Instead of trying to get your cat to drink through a straw, you can buy your cat a water fountain. Or let it drink water the old school way, right from the water bowl!

Even though we’re quick to associate straws with drinking, most cats won’t know what a straw is for. They’ll try to play with it, but it’s far from likely that they’ll want to drink from it.

Is it safe for a cat to play with straws?

It’s safe for a cat to play with a straw as long as it’s chasing it and pawing at it. Anything more than that, like chewing (or even worse, trying to eat) a straw, is completely off-limits. Make sure you pay attention to your cat whenever it plays with straws.

A safe, fun game to play with your cat using straws is to make it chase it around the room. As long as it doesn’t get close to it, your cat will remain active and engaged with the game.

Don’t let the straw drop to the floor when you’re tired, though, because your cat will go for the kill – and that would mean trying to bite it!

Should I let my cat chew on a straw?

You should never let a cat chew on a straw. You can supervise your cat when it’s playing with a straw, but the moment it starts chewing it, the game is over. Letting your cat chew a straw is way too dangerous because your cat may end up swallowing it.

Keep in mind some cats won’t try to play with a straw at all. Instead, they’ll start chewing it right away.

This happens when the straw has something tasty in it, like milk. Even though cats can’t have milk, they are still attracted to it – and because of that, they’ll want to chew on a straw with a little bit of milk in it!

Why are straws bad for cats?

Most straws are made out of plastic and other materials that cats can’t digest. If your cat happens to swallow a piece of a straw, you’ll have to hope it ends up in the litter box or you may have to go to the vet for surgery.

Straws, and anything else made out of plastic, can get stuck inside your cat’s digestive system – and that’s something that can ruin both your day and your cat’s. When something like that gets stuck, the only way to get it out is through surgery.

Sometimes, plastic will go right through a cat. But until it does, your cat won’t feel well and you will be nervous about it. It’s better to avoid this situation entirely and keep cats and straws away from each other.